The project is following the idea of the private studio library and continues in developing synthetic Czechoslovak language hybrid.  This time, I used the favourite childbooks.  Especifically I was using two texts: first was slovak folk tale written by well known slovak folk storyteller Pavol Dobšinský and second was its translation to Czech. In my work I used basic principles from morphology and lexicology. Firstly, the words of both texts are reduced to their fundamental elements, morphemes. I have decided to use the root morpheme from Czech language.  Secondary morphemes, such as prefixes and sufixes I added from Slovak language (new words = lexicology). The result was fluent hybrid text of a folk tale. The question of intelligibility of the text arised. It lead to an event with pupils of an elementary school. They were reading the tale and afterwards, they had written their own interpretations. The soundtrack  of the action,  written interpretations and the hybrid text in booklet became a part of installation.
See also:
Education 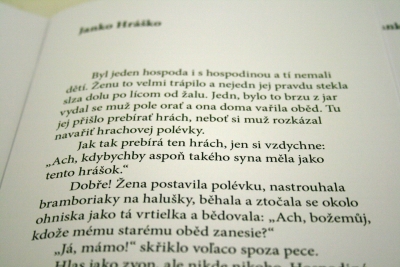 Czechoslovakia Private poetry The Quiet Performance for the Silent Stadium

We Are New Time